MACHINE INPUT OUTPUT
In bank exam (SBI, IBPS, and RRB) & SSC Reasoning is one of the most important sections. A good score in reasoning test can lead you at higher marks in banking exam. In reasoning MACHINE INPUT OUTPUT is important topic. Usually 5-6 questions can be given from this topic in bank exam or other competitive exams as well. It can be easy topic if you have right tricks to find out logic by which the sequence is going on in input output. Here we are providing important tips and machine input output questions which are asked in SBI, IBPS bank exams.
This topic is important for the main exam of SBI and IBPS. 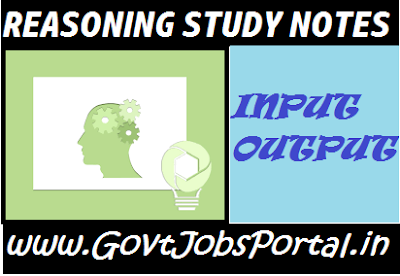 In Machine Input Output, a message comprising of randomness letters/words or numbers or a combination of both is given as the input followed by steps of rearrangement to give sequential outputs. The candidate is required to trace out the pattern in the given rearrangement and then determine the desired output step, according as is asked in the questions.
In input output, the basic problem is time management. You can obviously get the logic if you are free from time limit, but the challenge is to get the logic as quickly as possible and get done with the questions to score more. So, here you can learn how to solve machine input by saving your time.