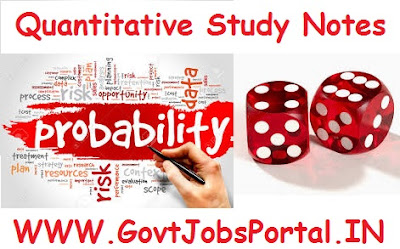 You know that quantitative aptitude section is most important in bank exams in PO and Clerk and for other competitive exams because if you want good score in bank exam then you have to score good in maths. In competitive exams the most important thing is time management, if you know how to manage your time then you can do well in Bank Exams as well as in other competitive exams. That’s where maths shortcut tricks and formula are comes into action. So continuously we are providing shortcut tricks on different maths topics. Today’s topic is Probability. This is the one of the most important topic in quantitative aptitude section in bank and SSC exam. You should know how to probability questions and answers in very short time for bank exam. From this chapter around 1-2 questions are given in the SBI and IBPS exams. For this here we are providing shortcut tricks and quicker method to solve probability problems in very short time. It is similar to previous topic permutations and combinations.

Introduction to Probability: it is a measurement of uncertainty. In this topic chances of the happening of events are considered.
Random Experiment:
It is an experiment which if conducted repeatedly under homogeneous conditions does not give the same result. The result may be any one of the various possible ‘outcomes’. Here the result is not unique (or the same every time). For example, if an unbiased dice is thrown it will not always fall with any particular number up. Any of the six numbers on the dice can come up.
Examples: 1. tossing a coin
2. rolling a dice.
Trial and Event:
The performance of a random experiment is called a trial and the outcome an event. Thus, throwing of a dice would be called a trial and result (falling of any one of the six numbers 1, 2, 3, 4, 5, 6,) an event.
Events could be either simple or compound (also called composite). An event is called simple if it corresponds to a single possible outcome. Thus, in tossing a dice, the chance of getting 3 is a simple event (because 3 occur in the dice only once). However, the chance of getting an odd number is a compound event (because odd numbers are more than one, i.e. 1, 3, and 5).
Mutually Exclusive Events: Two or more events are said to be mutually exclusive if the occurrence of any one excludes the happening of other in the same experiment.
eg. On tossing of a coin it head occur, then it prevents happing of tail, in the same single experiment.
Exhaustive Events: All possible outcomes of an event are known as exhaustive events.
eg. In a through of single dice the exhaustive events are six { 1, 2, 3, 4, 5, 6 }
Equally Likely Event: Two or more events are said to be equally likely if the chances of their happening are equal.
eg. In throwing of an unbiased coin, result of Heat and Tail is equally likely.
Playing Cards:
(1) Total number of card are 52.

To view quantitative study notes on other topics CLICK HERE