Question tags with answers | Use of Question Tags Rules

Use of Question Tags Rules

The main purpose of using question tags is to find whether something which is said is true or not. The tags are also used to get some kind of agreement against the statement or in favor of the sentence. 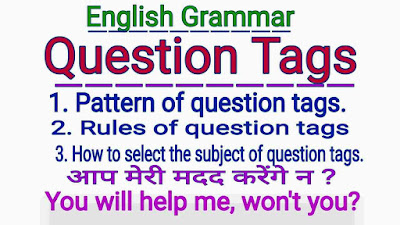 Another Question Tags rule which you need to keep in mind is that if the main sentence has an auxiliary verb you are supposed to use the auxiliary in the question tag also.

Some of the examples are:
They are busy, aren’t they?
She is going, isn’t she?
They haven’t arrived, have they?

On the other hand if the main sentence does not have an auxiliary verb in that case the tag takes the various forms of the verb “do”.
You love fish, don’t you?
She came today, didn’t she?

Finally it can be concluded saying that question tags with answers are phrases which are added to the main part of the sentence. These question tags generally invite opinion from the listener. But the most important thing in these tags is that affirmative is followed by negative and vice versa. As you use the tag the verb always comes in front of the noun or the pronoun. That’s all about this Question Tags rule article. Time to time we will share more ENGLISH GRAMMAR TUTORIAL with you readers so subscribe us on Facebook @ https://www.facebook.com/latestgovtjobs4u