How to Prepare Current Affairs for Civil Services Exam ?

How to Prepare Current Affairs for Civil Services Exam?

Current affairs to the civil services exam is what the backbone is to the human body. Just as without a backbone, our body shall not get the support to stand erect, without current affairs, civil services preparation shall come crumbling on the ground.

To state a simple fact, current affairs accounts for almost sixty percent of the GS syllabus. If we take an extended view, the current affairs count even in optional papers such as Political Science, Sociology, Public Administration Geography etc.

The second paper of these optional are applied aspects of the subject with special bearing for India. And unless one knows the current developments related to the topics of these optional papers, it will be impossible to write an effective, relevant answer.

Thus, one can safely say that current affairs is an all-pervasive phenomenon in civil services exam and no one can get away from this reality. Sadly, few understand the importance of current affairs in this exam.

Even those who are aware of its importance are at a loss to understand as to how to handle it. It results in poor preparation, poor marks, and frustration among the aspirants. Therefore, a true understanding of the value and significance of current affairs is the key to success in the civil services exam.

This article briefly summarises current affairs in all its aspects to navigate the path of preparation for the aspirants who lack direction and purpose while attempting to cover current affairs part. 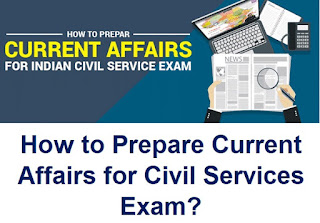 As we all know, civil services exam is a process to select generalists and not specialists in various administrative jobs. It follows from this that a candidate must demonstrate a good knowledge of the issues and events that have social, economic, political and administrative implications. For a career in civil services, knowledge of issues of current relevance is important to make informed decisions.

Macaulay, who introduced the merit-based civil services under the Charter Act 1853, said :" Knowledge is transferrable" By this what he meant was that if a candidate has a wide knowledge of diverse subjects, it will translate into his capacity to govern better. In other words, a civil servant, with a wide knowledge base is better equipped to discharge his duties in order to meet the broader administrative goals as also to act in the larger public interest. Thus, the goal of wider knowledge as advocated by Macaulay can be achieved by a good comprehension of current affairs which is made up of a very wide, diverse range of topics reported in newspapers, journals, websites and electronic media.


Current affairs: Its interface with prelims and mains syllabus

Prelims exam and current affairs: As it stands today, prelims has emerged as the most difficult part of civil services exam. Many candidates are not able to clear prelims even in 2-3 attempts. Some even do not qualify it after 5 attempts. This huge failure rate can be explained in terms of

1). Prelims being a screening test, it is more of an elimination process rather than a selection process and

How to command current affairs for prelims?

It is a formidable task indeed to command current issues for the prelims because anything from anywhere can be asked in the exam. But the phrase "anything from anywhere" can be understood to mean that it encompasses certain broad areas and certain time periods. In terms of the time period, the current events of the last three years are from where questions are going to be set. But it is going to be a big challenge to do the last three years of current issues. So what does one do? Well, the answer to this question is that more focus is to be given to events of last one year as bulk of questions will be from this segment.

Then, one should also quickly revise last two years current affairs (i.e. preceding the current year). To explain it further, it means that if you are going to appear in 2019 exam being conducted on 2nd June 2019, you should focus on events between July 1, 2018, to May 15, 2019. In addition, you should also check out important issues and events which took place in 2016-17 as well as 2017-18. It will be risky not to consider the last three years' current affairs and just concentrate on last year.

Areas of current affairs to be covered for prelims:

II. Economic issues: Under this, one should focus on issues confronting our agriculture, industry, trade and commerce, foreign trade, inflation, export, RBI, features of budget etc.

III. Govt programs and policies: Each year a number of govt schemes are launched. One must know thoroughly about these schemes and programs which can be accessed directly from govt websites or are extensively covered in Yojana, Kurukshetra magazines.

IV. Environment: This section has come alive recently in the prelims exam and a good number of questions are being asked from this section. It requires both the basic knowledge of ecology and environment as well as current happenings on this front. For example, one must know about World Overshoots Day, Earth Hour, Earth Day all of which were globally celebrated recently. Many reports on climate change have been published e.g. IPCC report, UN reports on loss of biodiversity etc. One has to look into the major findings of these reports. Special emphasis should be given to Indian environmental problems that have been recently reported in news.

V. Awards: This includes sports, film, cultural awards and also awards given to Indian personalities. For example, PM Modi has been accorded highest UAE award " Zayed Medal" this year. Similarly, an Indian teenager, Amika George was given "Goal keepers of the world "award for her movement "Free periods" which is about making sanitary pads accessible to poor women. A documentary on India called "Periods: The end of Sentence"has won an Oscar award this year. These are highly likely questions in this year's prelims exam.

VI. Science and Technology: Latest developments and discoveries in sc./tech, with special reference to India must be covered with minute details. For example, the first picture of a black hole has taken by the Event Horizon telescope, the naming of this black hole as POWEHI, and the computer scientist, Ms, Katie Bouman, who developed the algorithm for this picture -such details are required to cover these scientific events. Similarly, the use of the technology known as CRISPR-cas9 for producing twin babies by a Chinese biotechnologist, He Jiankui and the significance of ASAT's success to India's space achievements are relevant for this year's prelims exam.