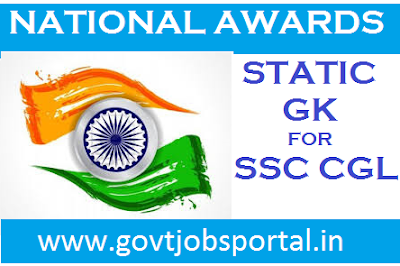 
Civilian awards of India are conferred to common man for showing distinguished work in their field of work. Any specific work background is not necessary for this national award. Any civilian who has shown great achievements in their field of professional work are considered eligible for this award.


List of national civilian awards in India:
Bharat Ratna,
Padma Shri,
Padma Bhushan and
Padma Vibhushan.
These national awards have a degree of reputation and honour. Bharat Ratna is of 1st degree, Padma Vibhushan is 2nd degree, Padma Bhushan is 3rd degree while Padma Shri is of last degree of honour of Civilian Awards. All these awards are conferred by President of India on the Republic Day. All of these awards were started from year 1954. All of these medals are produced at Indian Government Mint of Kolkata.
BHARAT RATNA
·         Bharat Ratna is the highest civilian national award of India, and is presented by the Government of India for exceptional public service and rarest achievements in the field of art, literature and science. It was instituted in 1954. 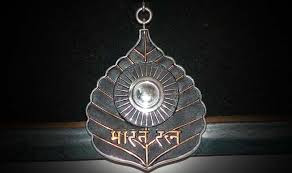 ·         Any person without distinction of race, occupation, position or sex is eligible for the award.
·         The recommendations for Bharat Ratna are too made by Prime Minister of India to be President of India.
·         The holders of Bharat Ratna rand 7th in the order of precedence; however they do not carry any special title nor any other honorific’s.
·         In 2011, the Government of India modified the eligibility criteria to allow sportspersons to receive the award and opened the award for performance of highest order in any field of human endeavour from the earlier criteria for the highest degrees of national service. This service includes artistic, literary, and scientific achievements, as well as “recognition of public service of the highest order.”
·         Indira Gandhi is the youngest person alive at the time of receiving the award (at the age of 54) and Rajiv Gandhi is the youngest overall to receive the Bharat Ratna (posthumously at the age of 47). Gulzarilal Nanda is the eldest person alive at the time of receiving the award (age 99) and Vallabhbhai Patel is the eldest overall (posthumously at the age of 116).
·         The decoration is the form of a peepal leaf, about 5.8 cm long, 4.7 cm wide and 3.1 mm thick, It is of toned bronze. On its obverse is embossd a replica of the sun, 1.6 cm in diameter, below which the words Bharat Ratna are embossed inDevanagari script. On the reverse are State emblem and the motto, also in Devanagari. The emblem, the sun and the rim are of platinum, the inscriptions are inburnished bronze.
PADMA VIBHUSHAN
·         Padma Vibhushan is the second hightest civilian national award in the Republic of India. It consists of a medal and a citation and is awarded by the President of India. 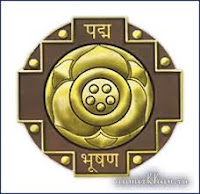 ·         It was established on 2 january 1954. It ranks behind the Bharat Ratna and comes before the Padma Bhushan and Padma Shri.
·         It is awarded to recognize exceptional and distinguished service to the nation in any field, including government service.
·         The first recepitants of this award were Satyendra Nath Bose, Nand Lal Bose, Zakir Hussain, Balasheb Gangadhar Kher, Jigme Dorgi Wangchuk V. K. Krishna Menon in the year 1954. 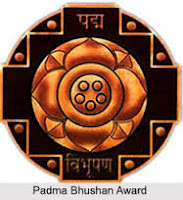 ·         Padma Bhushan is the third highest civilian national award in the Republic of India, after the Bharat Ratna and the Padma Vibhushan, but comes before the Padma Shri. It is awarde by the Government of India.
·         It is awarded to recognize distinguished service of a high order to the nation, in any field.
PADMA SHRI
·         Padma Shri is the fourth highest civilian national award in India, after the Bharat Ratna, the Padma Vibhushan and the Padma Bhushan. It is awarded by the Govenment of India.

·         It is awarded to citizens of India to recongnize their distinguished contribution in various spheres of activity including the Arts, Education, Industry, Literature, Science, Sports, Medicine, Social Service and Public Affairs. However, it has also been awarded to some distinguished individuals who were not citizens of India and who did contribute in various ways to India.