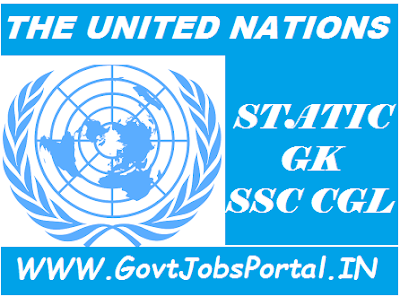 
UNITED NATIONS ORGANISATION
·         World’s largest international organisation and a successor League of Nations. (League of Nations was formed after the 1 World War, but it failed).
·         The Charter of the UN was signed at San Francisco on June 26, 1945, at a meeting of the representatives of 50 states, representing 2/3rd of the world population.
·         The name United Nations was given at the instance of US President Roosevelt.
·         The Charter or Constitution was formed at Dumbarton Oaks (Washington DC) conference by USSR, UK, US and China.
·         Formally came into existence on Oct 24, 1945.
·         First regular session was held in London in Jan, 1946 and Trygve Le (Norway) was elected the first Secretary General.
·         Headquarters located at First Avenue, UN Plaza, New York City, New York, US. It is 17 acre tract of land donated by John S. Rockfeller. The building is 39 storeys.
·         Flag: white UN emblem (2 bent olive branches open at the top, and in between them is the map of the world) on a light blue background. It was adopted on Oct 20, 1947. The UN Flag is not to be subordinated to any other flag in the world.
·         The purposes of the UN can be divided into 4 groups: Security, Justice, Welfare and Human rights.
·         Disarm, decolonise and develop are the 3 new objectives set forth by the UN.
·         One of the principles of UN is not to interfere in the internal affairs of any State so long as it acts according to the terms of the charter.
·         The official languages of the UN are English, French, Chinese, Russian, Arabic and Spanish, while the working languages are English and French only.
·         Admission of Members: New members are admitted to the recommendation of the Security Council.
·         The present membership of UN is 193. South Sudan joined in 2011.
ORGANS OF THE UNITED NATIONS
There are six principal bodies of the UN:
1)     General Assembly
2)     Security Council
3)     Economic and Social Council
4)     International Court of Justice
5)     Trusteeship Council
6)     Secretariat
GENERAL ASSEMBLY
·         Consists of all member states of the U.N. each member nation can send five delegates but each nation has only one vote.
·         The General Assembly meets in regular session beginning in September each year.
SECURITY COUNCIL
·         It is executive body of the U.N. It consists of total 15 members, out of which 5 members are permanent and the remaining 10 members are non-permanent.
·         China, France, Russia, UK and USA are the permanent members.
·         The non-permanent members are elected by the General Assembly for 2 years from among the member states.
·         The permanent members of the Security Council have got veto power. Any matter supported by the majority of the members fails to be carried through if negative vote is cast by any of the permanent members.
ECONOMIC AND SOCIAL COUNCIL
·         This organ of the U.N. consists of 54 representatives of the member countries elected by a two third majority of the General Assembly.
·         Its main function is to achieve international co-operation by solving international problems of economic, social, cultural and humanitarian character.
·         One third of this council is elected every year for the period of three years and equal numbers retire annually.
INTERNATIONAL COURT OF JUSTICE
·         It is the principal judicial organ of the United Nations.
·         The headquarters of the International court of justice is at the Hague (Netherlands).
·         The court consists of 15 judges. The judges of the court are elected by the General Assembly along with the Security Council for a nine year term.
TRUSTEESHIP COUNCIL
·         This organ consists of 14 members out of which five are the permanent members of hte security council.
·         The function of this organ is to provide for an international trusteeship system to safeguard the interests of inhabitants of territories which are not yet fully self governing and which may be placed there under by individual agreements.
SECRETARIAT
·         This organ of the United Nations is the chief administrative office which coordinates and supervises the activities of the U.N.
·         This secretariat is headed by a secretary General who is appointed by the General Assembly on the recommendation of the Security Council.
·         Secretary – General of the U.N. is elected for five years and eligible for re-election.