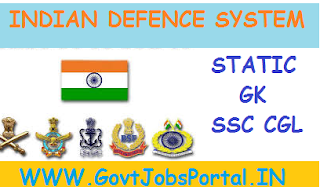 General Awareness is a source for good preparation of Bank, SSC CGL, UPSC, and railway and for other competitive exams. Study General Awareness from www.GovtJobsPortal.in and stay updated as well as prepare for General Awareness section which is asked in SSC CGL, UPSC and other competitive exams. Here we are providing static GK for SSC CGL exam. Today’s topic on static GK is INDIAN DEFENCE. The president of India is the supreme commander of the Indian Defence System. The whole administrative control of the Armed forces lies in the Ministry of Defence. Indian Defence System has been divided into three services – Army, Navy and Air force. We will discuss one by one all these services: Indian Army, Navy and Air force.

INDIAN AIR FORCE
Indian Air Force is organised into seven commands, these are