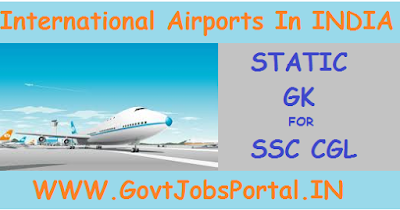 General Awareness & Static GK is a good source for preparation of Bank, SSC CGL, UPSC, and railway and for other competitive exams. Study General Awareness from www.GovtJobsPortal.in and stay updated as well as prepare for General Awareness section which is asked in SSC CGL, UPSC and other competitive exams. Here we are continuously providing static GK for SSC CGL exam on various topics. Today’s topic on static GK is INTERNATIONAL AIRPORTS IN INDIA. Airports are the places where aircraft generally those carrying people take off and lands from one place to another place. These are the fastest mode of transportation in today’s world. A lot of people daily fly through the airplanes for their business or domestic purposes. In this topic we are providing information about international airports in India, city, state and name of Airports.