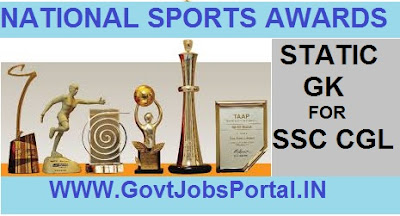 General Awareness is a source for good preparation of Bank, SSC CGL, UPSC, and railway and for other competitive exams. Study General Awareness from www.GovtJobsPortal.in and stay updated as well as prepare for General Awareness section which is asked in SSC CGL, UPSC and other competitive exams. Here we are providing static GK for SSC CGL exam. Today’s topic on static GK is INDIAN SPORTS AWARDS. Indian Government presented sports awards and honours to athletes and sports persons for their accomplishments and outstanding performances in various fields of sports. Initially Government gives grants to the athletes and sports persons for their excellent performances in all types of sport competitions. But since 2001, the Indian sports awards and honours are given only in those events that fall under the Olympic Games, Commonwealth Games, Asian Games, World Cup or World Championship and also in Cricket. The awards are also given for the National level competitions and for Sports intended for the Physically Challenged.


ICC AWARDS (sports award for cricket):
It is a set of sports awards for cricket. The awards recognize and honor the best international cricket players of the previous 12 months. The Awards has been institutionalized by International Cricket Council since 2004.


Cricket sports awards are presented every year given below:
1.      ICC Player of the year.
2.      Women’s Cricketer of the Year
3.      Test Player of the year
4.      ICC One – day Player of the Year
5.      T20 Player of the Year
6.      Captain of the Year
7.      Emerging Player of the Year:
Payers eligible for this award must be under 26 years of age at the start of the voting period and have played no more than five tests and/or 10 ODIs before that date.
8.      Test Team of the year
9.      One – day Team of the year
10.  Spirit of Cricket Award:
Described by the ICC as awarded to the team most notable for “upholding the ‘Spirit of the Game’, involving respect for their opponents, their own captain and team, the role of the umpires and hte game’s traditional values.
11.  Umpire of the year
RAJIV GANDHI KHEL RATNA
§  Instituted in the year 1991 – 92, it is India’s highest honor given for achievement in sports. The words “ Khel Ratna” literally  mean “sports gem” in Hindi.
§  The award is named after the late Rajiv Gandhi, former Prime Minister of India.
§  It carries a medal, a scroll of honour and a cash component of Rs 7,50,000.
§  Chess wizard Viswanathan Anand was the first recipient of this coveted award.
ARJUNA AWARDS
§  They were instituted in 1961 by the Government of India to recognize outstanding achievement in National sports. The Indian award carries a cash prize of Rs. 5,00,000, a bronze statuette of Arjuna and a scroll.
§  The government has recently revised the scheme for the Arjuna Award. As per the revised guidelines to  be eligible for the award, a sportsperson should not only have had good performance consistently for the previous there years at international level with excellence for the year for which the Award is recommended, but should also have shown qualities of leadership, sportsmanship and a sense of discipline.
§  The award is given only in disciplines falling under the following categories:
1.      Olympic Games
2.      Asian Games
3.      Commonwealth Games
4.      World Cup
5.      World Championship Disciplines and Cricket
6.      Indigenous Games
7.      Sports for the Physically Challenged
DRONACHARYA AWARD
§  This Indian Award is presented by the government of India for excellence in sports coaching. The award comprises a bronze statuette of Dronacharya, a scroll of honour a cash component of Rs 5,00,000. The award was instituted in 1985.
§  As the best sports person award is named Arjuna Award, it is appropriate that the coaching award is named after Dronacharya, as he was the Guru of Arjuna.
§  Cuban boxing coach B.I Fernadez was the first foreign coach who was awarded the dronacharya Award (in 2012).
DHYAN CHAND AWARD
§  Initiated in 2002, it is India’s highest sport award for lifetime achievement in sports and games, given by the Government of India. The award is named after the legendary Indian hockey player Dhyan Chand.
§  The award carries a cash prize of Rs 5,00,000, a  statuette ceremonial dress and a scroll of honour.