NEET score to be valid for 3 years

New rule will help students aspiring to study medicine in foreign universities as the scorecard will remain applicable for three years.

“The result of NEET shall be valid for a period of three years from the date of declaration of result,” states the official circular issued by MCI. This will grant students more time to prepare and finalise an international university. 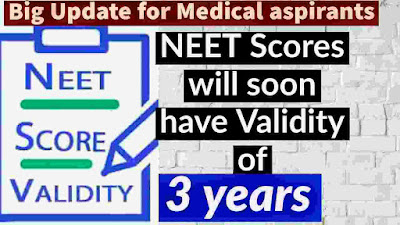 “The average admission process takes 6-12 months to get through in most institutes abroad. Sometimes managing finance and visa procedures also take time. For instance, if a student clears NEET this year but receives admission confirmation in a foreign university next year, there is ambiguity among students regarding eligibility with respect to NEET scores,” says VK Paul, chairman of MCI and member of National Institution for Transforming India (NITI Aayog).

“In the absence of this rule, students might have to go through the trouble of taking NEET all over again,” he says. Ease of admission, says Paul, is the prime focus of the decision.

“MCI wanted to address the issue with a pragmatic approach and hence, we have kept the limit of three years as the standard and format of NEET can change with time,” he adds. This rule, says Paul, will also address the issue of mismatch between the Indian academic sessions and admission cycles of foreign universities. “Unlike India, most of the international universities function on a semester basis and have admission intake twice a year. This will prevent students missing out on their admissions abroad,” he adds.