Why women should pursue a career in Civil Engineering

The world of engineering is perceived as a male-dominated bastion. When it comes to picking a stream such as civil, mechanical and electrical, girls come across statements such as “this field is not for you”. The skewed gender disparity in the field is still not a valid reason to deter women who want to pursue engineering.

Although there has been a rise in the number of women in the engineering sector, most girls are attracted to IT or computer science. Traditionally, civil engineering has been a male-dominated sector since this profession demands not only the skillsets but also physical endurance. However, with significant technological advancements, this is no longer a deterrent for girls in pursuing a career in civil engineering.

At a construction site, women constitute the labour force, but in an engineering school, there are only a few girls who pick this stream. With several girls determined to break the stereotypes, they are taking up the course and are willingly opting for a job where they are required to work in a construction site. 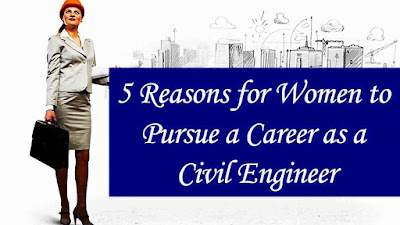 All girls who have a desire to take up civil engineering stream must not hold themselves back just because of the line drawn by the society to divide the sectors on the basis of gender. If one has the aptitude, nothing can stop them from attaining their goal. Here are five reasons why you should pursue a career in civil engineering:

NOT A PHYSICALLY WEAKER GENDER Women are still seen as the physically weaker gender, although they have already proven their ability to do more than expected. In India, the general belief is that women do not enjoy being in the field, toiling. With changing times, we see women taking up a lot of challenging roles in defence, for instance

BRING NEW IDEAS TO THE TABLE Women can bring in a different perspective while designing and executing a project, which will have a huge positive impact in realizing aesthetically appealing structures. It is 2019 and in this age, if we are questioning women’s capabilities in the field of civil engineering, it is surprising.

The Brooklyn Bridge was completed in 1883 by the ‘first field woman engineer’ Emily Warren Roebling. She took over her husband Washington Roebling’s responsibilities as a chief engineer after he was bedridden due to illness. She undertook day-to-day supervision and project management and saw out the finalization of the bridge with great dedication.

BREAK THE STEREOTYPE There is no field that women have not invaded currently. Women have the amazing ability to spot any possible opportunity and give them life. It is sad to see people stereotyping civil engineering as a man’s job. Be it desk job or the field, women are thriving. The tag of, ‘man’s job’ should not deter any woman from not pursuing it, if that is their passion. All you need is conviction and ability to handle mental and physical pressure that is a part of the civil engineering job profile.

DO WHAT YOU LOVE When it comes to finding a strong reason to pursue civil engineering, there is no other reason than this. It is worth it if you are doing what you love. It clearly does not matter, if it is going to be difficult or what people are going to think about it. If that is what you would like to do, you should definitely go for it. The key to success is persistence. While we have come a long way in the last few decades in progressing equality between the sexes, it has not been uniform on the professional front. Civil engineering would be a lot richer with greater participation of women.

MULTITASK YOUR WAY TO IT
Women are known for their multitasking abilities. Often, desk jobs are suggested for women, which is believed to offer them time to strike a balance between home and work. It may not be easy for women to make a mark as a civil engineer, but it is not as difficult as it appears. From the time when A Lalitha, became the first woman engineer of India in 1940 when she graduated from the University of Madras, we have come a long way. Today, we have several prolific women engineers who have made a mark with their acumen.