MODERN HISTORY OF INDIA LECTURE 4 - ALL ABOUT ANGLO MARATHA WARS

Those who had missed our those lectures can click on the following link to access: “ Modern History of India Class 1 to 3”.

After the video tutorial, we have shared a text file in a summary form about the Anglo Maratha Wars lecture. After watching this Indian history tutorial you can note down the important points from the given article below.

v Maratha Empire was a power that dominated a large portion of the Indian subcontinent in the 18th century. The empire came into existence from 1674 with the coronation of Shivaji as the Chhatrapati and ended in 1818 with the defeat of Peshwa Bajirao II by the hands of British East India Company. The Marathas are credited for ending the Mughal rule in India.

v Background….
•       The 3rd Peshwa Balaji Baji Rao died in 1761 due to shock after his defeat at the Third Battle of Panipat.

•       His son Madhavrao succeeded him. He was able to recover some of the Maratha power and territories which they had lost in the Battle of Panipat. 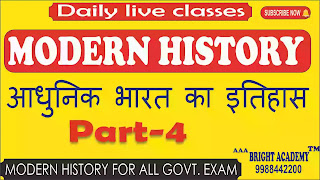 FIRST ANGLO MARATHA WAR (1775-1782)
v COURSE OF THE WAR
•       As Narayanrao became the Peshwa but his uncle Raghunath Rao wanted to become the Peshwa.

•       Treaty of Surat was signed in 1775 according to which Raghunathrao ceded Salsette and Bassein to the English and in return, he was given 2500 soldiers.

•       The British and army of Raghunathrao attacked the Peshwa and they won.

•       According to this, Raghunathrao was given a pension only and Salsette was retained by the British.

•       But the British establishment at Bombay violated this treaty and they sheltered Raghunathrao.

•       This action led the British to advance a force towards Pune. There was a Battle fought at Wadgaon near Pune in which the Marathas under Mahadji Shinde secured victory over the English.

•       Later Series of battles were fought, and at the end Treaty of Salbai was signed in 1782. This ended first Anglo-Maratha war.

v RESULT OF THE WAR
•       The English accepted Madhavrao Narayan II (son of Narayanrao) as the new Peshwa.
•       All territories by the British after the Treaty of Purandhar was ceded back to the Marathas.

SECOND ANGLO – MARATHA WAR (1803-1805)
•       In 1802 in the Battle of Poona, Yashwantrao Holkar, (chief Holkars) defeated the Peshwas and the Scindias.
•       Baji Rao II sought British protection and signed the Treaty of Bassein with them.
•       As per the treaty, he ceded territory to the British and agreed to the maintenance of British troops there.
•       But The Scindias Bhonsles  & Holkars did not accept this.

v RESULT OF THE WAR
THIRD ANGLO – MARATHA WAR (1775-1782)
v COURSE OF THE WAR
•        After the 2nd Anglo-Maratha war, the Marathas made one last attempt to rebuild their old prestige.
•        The main reason for this war was the British conflict with the Pindaris.
•        The Maratha chiefs Peshwa Bajirao II, Malharrao Holkar and Mudhoji II Bhonsle made a united front against the English.

v RESULT OF THE WAR
•       The Treaty of Mandasor was signed between the British and the Holkar in 1818.
•       The Peshwa then surrendered in 1818. Peshwa was dethroned and pensioned off to a small estate in Bithur (near Kanpur).
•       This war also led to the end of the Maratha Empire.

•       East India company needs a lot of cash to maintain an army & other issues.

q So what was the Solution???
Ø To Start collecting revenue from India.

Ø Then buy Indian raw material from India and  Export it to England.

Ø Finally Import finished goods back to India from England.

Ø As the revenue system under Mughals and Native rulers was too complex for the Britishers to understand. So Lord Cornwallis just ‘outsource’ the tax collection work to Indian-middlemen: Zamindars, Jagirdar, Inamdars, Lambardar etc.

DRAIN OF WEALTH….
•       Dadabhai Naoroji in his book Poverty and Un-British Rule in India brought attention to the drain of India's wealth into Britain.
•       Romesh Chunder Dutt was a major economic historian of India of the 19th century. Dutt’s thesis on de-industrialization of India remains forceful argument in Indian historiography.

Permanent Settlement
•       Permanent settlement was initiated by Governor-General Lord Cornwallis.
•       Initially It was started only for a temporary period of 10 years in 1790, however, this system was made permanent in 1793.
•       It was implemented in the provinces of Bengal, provinces of Bihar, provinces of Orissa, Banaras of UP and North Karnataka.
•       British also designated Zamindars (local tax collectors), as owners of the land in their district.
•       Under  this system, the Zamindars got 1/9th part while gave 8/9th to the government.
•       Zamindar’s right over land was
Alienable:  British could take it away and give it to another Zamindar, if first Zamindar did not meet the Revenue collection ‘targets’.
Rentable: Zamindar himself could further outsource his work among smaller zamindars.
Heritable: If Zamindar dies, his son/brother etc would get it.

Ryotwari system
•       Ryot means peasant cultivators.
•       This Ryotwari system of land revenue was instituted in the late 18th century by Sir Thomas Munro, Governor of Madras in 1820.
•       Zamindar/feudal lords already existed in Bihar, Bengal, since the times of Mughal administration. But Madras, Bombay, Assam did not have Zamindars with large estates.
•       Under the system The taxes were directly collected by the government from the peasants.
•       Taxes were fixed in a temporary settlement for a period of thirty years and then revised.
•       As the government insisted on cash revenue, farmers resorted to growing cash crops instead of food crops.
•       These cash crop needed more inputs and this leads to more loans and indebtedness.
Mahalwari System
•       Mahalwari system was introduced in 1833.
•       North-West Frontier, Agra, Central Province, Gangetic Valley, Punjab areas selected for this Mahalwari system.
•       Under this Revenue was collected by the village headman or village leaders (lambardar).
•       This Mahalwari system divided the land into Mahal. A Mahal was constituted by one or more villages.
•       This Mahalwari system was called the Modified Zamindari system because the village headman became virtually a Zamindar.

q Consequences
•       Under this Land became a commodity.
•       Due to the very high taxes, farmers now started growing cash crops instead of food crops. This led to food insecurity and even famines in many areas.
•       Bonded labour also arose due to this because loans were given to farmers/labourers who could not pay it back.
•       When India get freedom from colonial rule, 7% of the villagers (Zamindars/landowners) owned 75% of the agricultural land.