In reasoning section, Blood relation is an important topic of UGC NET Paper 1. Scoring in blood relation is easier as compared to many other topics in the reasoning subject because students are well versed with types of relations that exist in a family. 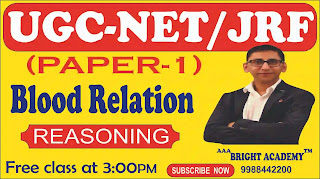 In this reasoning class video tutorial, the tutor will teach how to solve blood relation questions with tricks using a family tree method. So watch the full video to learn blood relation reasoning for UGC net paper 1 examination. Along with the Video tutorial we share a Practice test below related to this Blood relation class. First, watch the tutorial carefully then try to solve the practice test below if you are preparing for the UGC NET Paper 1 Reasoning section during this curfew time.


Key points Related to this UGC NET Paper 1 Tutorial:-
1.   Don’t be panic in the current situation especially for UGC Exam which is going to be held in June.

2.   Most probably exam date will be extended and may be clubbed with the December exam.

3.   Free gift of online classes on the 17th anniversary of AAA-Bright Academy.

5.   Explanation of relations including in-laws relations.

6.   Shortcut for difficult direction based questions.

7.   Self made examples for easy understanding of questions based on blood relations.

8.   We attached 16 very new questions below after the video tutorial.

9.   Two special faculties appointed for doubts daily from 11am to 6pm.

10.    Never forgot to solve the Practice Test if you have watched the complete video tutorial.

UGC NET Paper 1 Reasoning Practice Test
Blood Relation Practice Test for UGC NET Paper 1
1.    Ram, Reena, Kamlesh, Pawan, Rohini, and Sita are six family members. Ram and Reena are a married couple. Rohini is sister of Pawan. Reena is daughter-in-law of Sita, who is grandmother of Rohini’s brother. Pawan is the only son of Kamlesh, who is the brother of Ram. What is the relation of Reena with Pawan?
A)   Brother
B) Mother
C) Uncle
D) Aunt
E) None of these

2.    Mohit and Arun are brothers. Meena and Manisha are sisters. Mohit's son is Manisha's brother. How is Arun related to Meena?
A) Brother
B) Father
C) Son
D) Uncle
E) None of these

3.    Pooja who is the sister-in-law of Rohit, and the daughter-in-law of Kalpana. Neeraj is the father of Randeep who is the only brother of Rohit. How Kalpana is related to Rohit?
A) Mother-in-law
B) Father
C) Mother
D) Wife
E) Aunt

4.    Rohan's son Bharat is married with Chandani whose sister Damini is married to Parm who is the brother of Bharat. How Damini is related to Rohan?
A) Daughter-in-law
B) Father
C) Mother-in-law
D) Wife
E) Daughter

7.    Jasleen is sister of Tara. Tara is married to Deepak. Deepak is the father of Rajan. Mohit is son of  Hatim. Tara is the mother-in-law of Hatim. Deepak has only one son and no daughter. Jasleen is married to Bunty. Lila is the daughter of Bunty. How is Lila related to Tara?
A) Niece
B) Sister
C) Can’t be determined
D) Mother
E) None of these

8.    Arjun is son of Bablu. Chetna is Bablu’s sister has a son Dinesh and a Daughter Ekta. Akhil is the Maternal uncle of Dinesh. How many nephew does Akhil have?
A) Nil
B) Two
C) One
D) Three
E) None of these

9.    If Ricky is the spouse of Rita, how is Neha related to Ricky?
A) Sister
B) Cousin
C) Mother-in-law
D) Wife of Brother-in-law
E) None of these