Today on 25th January 2022, the Home Ministry of India has declared the list of recipients of the Padma awards 2022. The Padma Vibhushan Award is one of the highest civilian awards of the country. Soon we will share a GK Trick with you readers to remember the Padma Vibhushan Award Winners list 2022. There are 128 people who have been honoured this year with the Padma Awards 2022. These Awards are presented in three groups which are as follow:

These Padma awards are given by the President of India. The ceremonial functions were held at his official residence of the Rashtrapati Bhawan India. 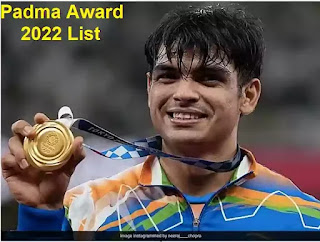 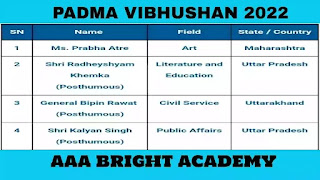 ·       Vaccine makers: Cyrus Poonawalla of the Serum Institue and Krishna Ella and Suchitra Ella of Bharat Biotech have been honoured with Padma Bhushan.

·       The CEO of Microsoft and Google Satya Nadella and Sundar Pichai has been named for the Padma Bhushan honours.

·       Singer Sonu Nigam and Olympic gold-medallist Neeraj Chopra have been honoured with a Padma Shri.