Padma Awards are one of the highest civilian awards in India, instituted in the year 1954. These awards are given in three categories - Padma Vibhushan, Padma Bhushan, and Padma Shri - for exceptional and distinguished service in various fields such as art, literature, education, science, sports, medicine, social service, and public affairs. In this post, we will share the Padma Awards winner list for 2023. 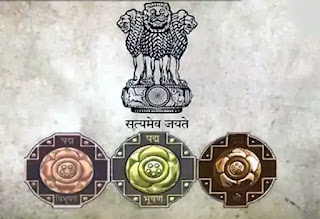 These Awards are conferred by the President of India at ceremonial functions which are held at Rashtrapati Bhawan usually around March/ April every year. For the year 2023, the President has approved the conferment of 106 Padma Awards including 3 duo cases (in a duo case, the Award is counted as one) as per list below. The list comprises 6 Padma Vibhushan, 9 Padma Bhushan, and 91 Padma Shri Awards. 19 of the awardees are women and the list also includes 2 persons from the category of Foreigners/NRI/PIO/OCI and 7 Posthumous awardees.

·      Padma Vibhushan: This is the highest award in the Padma Awards category and is awarded for exceptional and distinguished service of the highest order. It is awarded to individuals who have made exceptional contributions in any field, including the arts, literature, science, and public service.

·      Padma Bhushan: This award is given for distinguished service of a high order in any field, including the arts, literature, education, science, sports, medicine, social service, and public affairs.

·      Padma Shri: This award is given for distinguished service in any field, including the arts, literature, education, science, sports, medicine, social service, and public affairs. It is the fourth-highest civilian award in India.

More About the Padma Awards: The awards are announced on the occasion of Republic Day (26th January) every year and are presented by the President of India at a ceremonial function held at the Rashtrapati Bhavan in New Delhi. The awards are open to all citizens of India, whether in government service or not, and also to non-citizens.

The nominations for the awards are invited from the general public and are screened by a committee comprising eminent personalities from various fields. The final selection is made by the President of India based on the recommendations of the committee.

The Padma Awards have been awarded to many notable individuals from various fields, including politicians, artists, scientists, sportspersons, and social activists. Some of the notable recipients of the Padma Awards include Mother Teresa, Nelson Mandela, Sachin Tendulkar, Ratan Tata, and Lata Mangeshkar.

Overall, the Padma Awards are a prestigious honor that recognizes and rewards the exceptional contributions of individuals in various fields and is a true testament to their dedication and service to the nation.