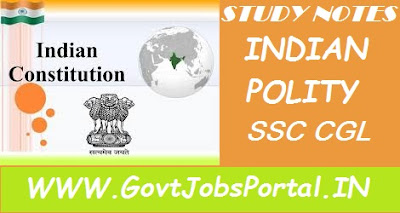 General Awareness is a source for good preparation of Bank, SSC CGL, UPSC, and railway and for other competitive exams. Study General Awareness from www.GovtJobsPortal.in and stay updated as well as prepare for General Awareness section which is asked in SSC CGL, UPSC and other competitive exams. As continuously we are providing static GK study notes for SSC CGL on various topics. Today we are providing study notes on ‘INDIAN POLITY’. Indian polity is one of the most important topics for general awareness section in the competitive exam. From this topic maximum 10-12 questions are given in the SSC CGL exam.
On this page in first we introduce the preamble to the Indian constitution after that we also provided the main features of the INDIAN CONSTITUTION which are borrowed from the constitution of other countries.

WE, THE PEOPLE OF INDIA, have solemnly resolved to constitute India into a
SOVEREIGN SOCIALIST SECULAR DEMOCRATIC REPUBLIC
And to secure to all citizens: JUSTICE social, economic and political;
LIBERTY of thought, expression, belief, faith and worship;
EQUALITY of status and of opportunity; and to promote among them all
FRATERNITY assuring the dignity of the individual and the unity and integrity of the Nation;
IN OUR CONSTITUENT ASSEMBLY, this twenty – sixth day of November, 1949, do
HEREBY ADOPT, ENACT AND GIVE
TO OURSELVES THIS CONSTITUTION.

The idea of preamble was borrowed from the constitution of USA.
The words ‘SOCIALIST’, SECULAR’ and ‘INTEGRITY’ were added by the 42nd Amendment in 1976.
SOVEREIGN means free to follow internal and external policies.
SOCIALIST means no concentration of power and money.
SECULAR means no particular religion.
DEMOCRATIC means elected representatives.
REPUBLIC means no room for hereditary ruler or monarch.
Preamble is not justiciable.
BORROWED FEATURES OF THE INDIAN CONSTITUTION
Nearly 75 per cent of the constitution can be said to be a reproduction of the Government of India Act, 1935 with suitable adaptations and modifications. The basic structure of the polity and provisions regulating Union-State relations, declaration of emergency etc. were largely based on the 1935 Act.
Besides the indigenous sources, the Constituent Assembly had before it several models of foreign constitutions.


FROM UK:
1)     Nominal Head – President (like Queen)
2)     Cabinet System of ministers
3)     Post of the PM
4)     Parliamentary type of Government
5)     Bicameral Parliament
6)     Lower House more powerful
7)     Council of Ministers responsible to Lower House
8)     Speaker in the Lok Sabha
9)     Single citizenship
FROM U.S.
1)     Written Constitution
2)     Executive head of state known as President and his being the Supreme Commander of  the Armed Forces
3)     Vice – President as the ex – officio Chairman of Rajya Sabha
4)     Fundamental Rights
5)     Supreme Court
6)     Provision of States
7)     Independence of Judiciary and judicial review
8)     Preamble
9)     Removal of Supreme Court and High Court judges
FROM ERSTWHILE USSR
1)     Fundamental Duties
2)     Five year planning
FROM AUSTRALIA
1)     Concurrent list
2)     Language of the preamble
3)     Provision regarding trade, commerce and intercourse
FROM JAPAN
1)     Law on which the Supreme Court function
FROM WEIMAR CONSTITUTION OF GERMANY
1)     Suspension of Fundamental Rights during the emergency
FROM SOUTH AFRICA
1)     Procedure of Constitutional Amendments
FROM CANADA
1)     Scheme of federation with a strong centre.
2)     Distribution of powers between Centre and the States and placing Residuary Powers with the Centre.
FROM IRELAND
1)     Concept of Directive Principles of State Policy. (Ireland borrowed it from SPAIN).
2)     Method of election of the President
3)     Nomination of members in the Rajya Sabha by the President.