NATIONAL AWARDS AND HONOURS IN INDIA FOR SCIENCE & TECHNOLOGY 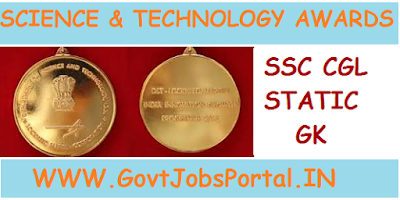 National medal of science. General Awareness is a source of good preparation for Bank, SSC CGL, UPSC, and railway and for other competitive exams. Study General Awareness from www.GovtJobsPortal.in and stay updated as well as prepare for General Awareness section which is asked in SSC CGL, UPSC and other competitive exams. Here we are providing static GK for SSC CGL exam. Today’s topic on static GK is National Awards and Honours for Science & Technology. India Science Award is the highest and the most prestigious national recognition by the Government of India to a person for outstanding contribution to science. The primary and essential criterion for the award is demonstrated and widely accepted excellence in science. The national science award covers all areas of research in science including medicine, agriculture and engineering. The award is announced and presented every year at the Indian Science Congress (ISC). The award carries a citation and gold medal as well as the prize money. The National medal of science.


LIST OF THE INDIA’s SCIENCE AWARD AND HONOURS:
JAMNALAL BAJAJ AWARD:
·         It is an Indian award, for promoting Gandhian values, social work and social development.
·         Established in 1978 by the Jamnalal Bajaj Foundation of Bajaj Group, it is given annually and is usually presented by the President, Vice president, Prime Minister of India or a leading figure.
·         The foundation was created in 1977 in the memory of group founder, philanthropist and a close associate of Mahatma Gandhi, Jamnalal Bajaj. The award ceremony takes place on his birth anniversary, Nov 4.
·         The award comprises a citation, a trophy, and a cheque of Rs five lakh each. It is given in four categories, namely:
1.      Constructive Work
2.      Application of Science and Technology for Rural Development.
3.      Outstanding contribution to the Development and Welfare of Women and Children (established in 1980, in the memory of Janaki Devi Bajaj).
4.      International Award for promoting Gandhian values outside India. (Established in 1988 on the birth centenary of Jamnalal Bajaj, given to an individual of foreign nationality).
SHANTI SWARUP BHATNAGAR PRIZE FOR SCIENCE AND TECHNOLOGY
·         It is the highest award for science and technology in India.
·         It is awarded annually by the Council of Scientific and Industrial Research (CSIR) for notable and outstanding research, applied or fundamental in biology, chemistry, environmental science, engineering, mathematics, medicine, and Physics.
·         The award is named after the founder Director of the Council of Scientific and Industrial Research, Shanti Swarup Bhatnagar. It was first awarded in 1958.
·         Any citizen of Indian engaged in research in any field of science and technology up to the age of 45 years is eligible for the Prize. The Prize is awarded on the basis of contributions made through work done primarily in India during the five years proceeding the year of the Prize.
·         The Prize comprises a citation, a plaque, and a cash award of Rs 5,00,000. In addition, recipients also get Rs 15,000 per month up to the age of 65 years.
BORLAUG AWARD
·         It is an award recognition conferred by a fertilizer company, Coromandel International Ltd for outstanding Indian scientists for their research and contribution in the field of agriculture and environment.
·         Instituted in 1972 and named in honour of Nobel Laureate Norman E. Borlaug.
·         The award carries a cash prize of Rs 5 lakh, a gold medal, and a citation.
DR B.C. ROY AWARD
·         Bidhan Chandra Roy Award was instituted in 1976 in memory of B.C. Roy by Medical Council of India.
·         The Award is given annually in each of the following categories: Statesmanship of the Highest Order in India, Medical man-cum-Statesman, Eminent Medical Person, Eminent person in Philosophy, and Eminent person in Arts.
·         It is presented by the President of India in New Delhi on July 1, the National Doctor’s Day.
·         The award comprises a silver medal, certificate and Rs 1 lakh.
HOMI BHABHA AWARD
·         Instituted in 1990, it is given in the field of atomic energy.
·         The award comprises Rs 5 lakh and a citation.
VIKRAM SARABHAI SCIENCE AND TECHNOLOGY AWARD:
It is one of the National awards for Science & Technology by the name of  Vikram Ambalal Sarabhai who was an Indian scientist and innovator widely regarded as the father of India's space programme. Sarabhai received the Shanti Swarup Bhatnagar Medal in 1962. The nation honoured him by awarding him Padma Bhushan in 1966 and Padma Vibhushan in 1972.
·         Instituted in 1990, it is given in the field of space research.
·         The award comprises Rs 5 lakh, a medal, and a certificate.
G.D BIRLA AWARD
·         GD Birla Award for Scientific Research is conferred by KK Birla Foundation.
·         The award comprises Rs 1.5 lakh and a certificate.
K.K. Birla Foundation
The K.K. Birla Foundation was established in 1991 by Krishna Kumar Birla. Its mission is to promote Literature (especially Hindi Literature) and the arts, as well as education and social work. It confers various awards, viz.
1.      Saraswati Samman Rs 7.5 lakh for prose/poetry work in any Indian language.
2.      Vyas Samman Rs 2.5 lakh for prose/poetry work in Hindi.
3.      Bihari Puruskar Rs 1 lakh for prose/poetry work in Hindi/Rajasthani, only authors from Rajasthan are eligible.
4.      Shankar Puruskar Rs 1.5 lakh for work in Hindi concerning Indian philosophy culture and/or art.
5.      Vachaspati Puraskar Rs 1 lakh for any work in Sanskrit
6.      G.D. Birla Award for scientific research Rs 1.5 lakh.