CBSE co-toppers regret: One short of perfect 100 in English

CBSE 12TH Class Toppers in 2019 Exam. Ghaziabad’s Hansika Shukla, who has topped the CBSE Class XII examination with 499 marks, has only one regret: scoring 99 in English. Shukla, who scored 100 each in history, political science, psychology, and Hindustani vocals, says she followed a ‘no social media’ policy. 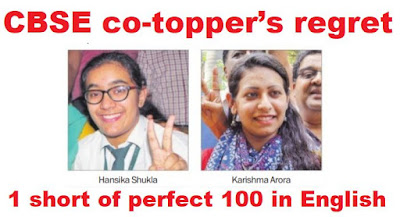 “I am on cloud nine, but now I feel it would have been perfect to get one more mark and have 100 in English. I regret that” Hansika said.

While her mother is an associate professor at a college in Ghaziabad, her father works as a secretary in the Rajya Sabha. A student of DPS, Ghaziabad, she said, “Whenever I wanted to relax, I listened to music but I followed a ‘no social media’ policy because it is a huge distraction. I never took any tuition.”

Sharing similar marks with her is Muzaffarnagar’s Karishma Arora, who chose to dance over the music to relax. “I am not much of a sportsperson. I like to dance when I am free and want to relax,” she said.

Coincidentally, both toppers want to pursue Psychology Honours. While Hansika has her eyes set on the UPSC exam, Karishma said she hadn’t thought about her future plans yet. Rishikesh’s Gaurangi Chawla, Rae Bareli’s Aishwarya and Bhavya from Jind got the second rank, scoring 498. With 497 marks, Parth Saini from Solan, Dishank Jindal (Chandigarh) and Piyush Jha (Dehradun) are among the 18 ranked third.


Source of Information: The Tribune Newspaper.