Fill up 3 Lakh Vacancies in 6 Months

New Delhi: UGC Department tells Higher education intuitions to fill up 3 Lakh Vacancies in the upcoming 6  Months. We come to know about this news from the most popular newspaper of India known as “The Times of India”.

The 6,100 teaching positions in central universities, including 4,000 from Delhi University, vacant since 2009 are likely to be filled up by November 2019.

There is a total of 3 lakh vacancies in government-run higher education institutions. The University Grants Commission issued guidelines on Tuesday asking the institutions to identify vacancies within 15 days and complete the process in 180 days. Great news for the applicants who want to pursue their career in the teaching profession.

Higher education institutions have been asked to ensure that all vacant posts, along with reservations details, are uploaded on the online portal. 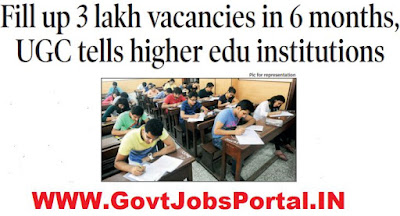 The direction, issued by UGC secretary Rajnish Jain, asked all universities, colleges, and institutions deemed to be universities to “adhere to the guidelines in letter and spirit.” As per the guidelines, identification of vacancies, permission from competent authorities to fill them, and their advertisement should be done in the next 60 days. The Commission has asked the universities/ colleges/ institutions to conduct the interviews by October 2019, and get required approval and issue appointment letters by November 2019.

Higher education institutions have been asked to ‘ensure that all vacant posts, along with reservations details, are uploaded on the online portal, www. Nherc.in’ “The monitoring of the process would be done by MHRD and UGC through this portal,” said official. According to sources, MHRD has launched a portal to monitor the process.

A senior government official said the matter was decided during the first review meeting of higher education taken by new HRD minister Ramesh Pokhriyal on Monday.