Hello dear reader, we are going to share modern history classes for UPSC, SSC, and other competitive examinations. We are sharing a major point related to the Modern History of India.

Students who are preparing for the UPSC, SSC Examination must watch this video tutorial series. This is the first post in which we are sharing the first 3 lectures related to the Modern History of India.

Complete Explanation About ANGLO-MYSORE WARS in Modern History of India

MYSORE’S WODEYAR DYNASTY
•         The Vijayanagara Empire disintegrated in 1565. The power vacuum created after that was exploited by Raja Wadiyar (ruled 1578–1617). Raja Wadiyar expanded the borders of Mysore kingdom and in 1610 he changed the capital city from Mysore to Srirangapatna; which is a rare island formed by the river Kaveri, which provided natural protection against military attacks.

RISE OF HAIDER ALI
•         He was the fifth child of Fath Muhammad's.  Haider Ali After serving for a number of years under the rulers of Arcot came to Seringapatam, where Hyder's uncle served.
•        Devaraja ,the dalwai of Krishnaraja Wodeyar II (military leader, chief minister, and virtual ruler)and his brother Nanjaraja, who also held an important minister was introduced by Haider Ali.
•        In the year 1758 Hyder Ali successfully forced the Marathas to lift a siege of Bangalore.
•        The young raja Krishnaraja rewarded Haider Ali’s performance by granting him the title Fath Hyder Bahadur or Nawab Hyder Ali Khan.
•        Later Hyder Ali assumed control of Mysore after overthrowing Khande Rao in 1761.
•        Hyder Ali established Arms the factory at Dindigul(T.N.) with the help of French.

How to learn GK : Easily, Fast and Effectively - Sports GK Tricks in English

,
How to learn GK fast and effectively

Dear students as Gk is an integral part of all competitive exam in this article we will guide you on study tips on how to prepare for general knowledge for entrance exams like SSC CGL, Railway, State exams, IAS, PCS, CLAT etc.

If a student is aspiring for a government job it is essential to stay aware of current affairs and all GK topics. In all competitive exams, approximately 25% of the paper comes from GK questions.  The extra focus on General Knowledge theory and questions will help students to score higher in less time and this will also help to perform well in Group Discussions and Interviews.

The important topics covered under General knowledge the section in Competitive exams are:


Now we will provide some  useful tips to study General Knowledge for competitive exams:

Make a time table and plan your studies .

Reading Habit: The Best way is to read newspapers daily. Reading newspapers daily will boost your GK skills. It will help you to keep a watch on what is happening around you and stay updated. Read the editorial of newspapers daily. This will also make GK interesting for you. The best newspapers to study General Knowledge include ‘The Hindu’, ‘Economic Times’, and ‘The Tribune’. Reading magazines like ‘Pratiyogita Darpan ‘ is very helpful

Prepare notes of General Knowledge: For current affairs and GK writing is the best way. Keeping a notebook in your own handwriting. Note down what is important to you as memorizing everything is not possible for anyone. Write short notes, 1-2 liners for examination point of view.

Take online quizzes of educational websites: It will help you to evaluate your progress and test your performance level. Quizzes help in boosting your confidence and morale. It gives you assurance that you are well prepared.
Dear READER the difference between the candidates who are selected and those who do not is that the former plan their studies and make strategies. Effective strategy and a strong presence of mind can help you achieve success in any competitive exam.

Revise GK using 24-7-30 concept  In general Knowledge section revision is very important and whatever you are studying revise that after 24 hours, then after 7 days then after 30 days. This way GK will go to your permanent memory and you will never forget that.
Hope this article on how to study GK for Competitive Exams will help you in an immense way. Also, watch the GK Tricks video related to the Sports GK.

Here we are sharing the complete CABINET MINISTER list 2019 with you readers. The President of India, as advised by the Prime Minister, has directed the allocation of portfolios among the following members of the Union Council of Ministers:-

Shri Narendra Modi Prime Minister and also in-charge of: Ministry of Personnel, Public Grievances and Pensions; Department of Atomic Energy; Department of Space; and All important policy issues; and All other portfolios not allocated to any Minister.

8. Shri Ravi Shankar Prasad: Minister of Law and Justice; Minister of Communications; and Minister of Electronics and Information Technology.

15. Dr. Harsh Vardhan: Minister of Health and Family Welfare; Minister of Science and Technology; and Minister of Earth Sciences.

16. Shri Prakash Javadekar: Minister of Environment, Forest and Climate Change; and Minister of Information and Broadcasting.

18. Shri Dharmendra Pradhan: Minister of Petroleum and Natural Gas; and Minister of Steel. 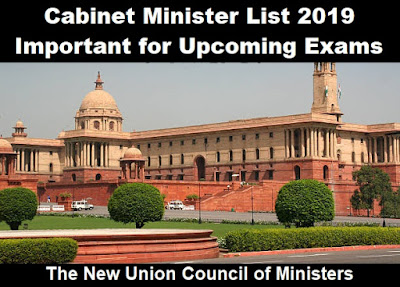 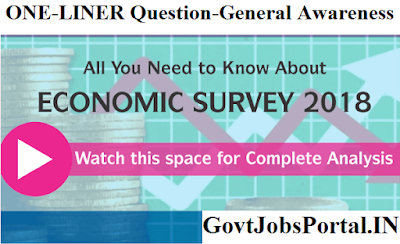 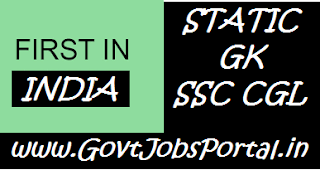 
Here we are providing static GK for SSC CGL exam. Today’s topic on static GK is “First In India”.
It is the List of First in India Significance with achiever in different categories and sections those will be helpful for General Awareness section in SSC CGL exam. 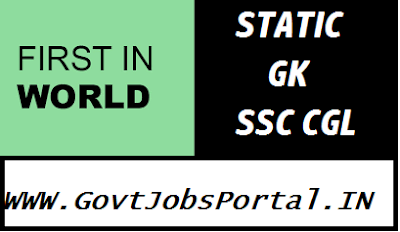